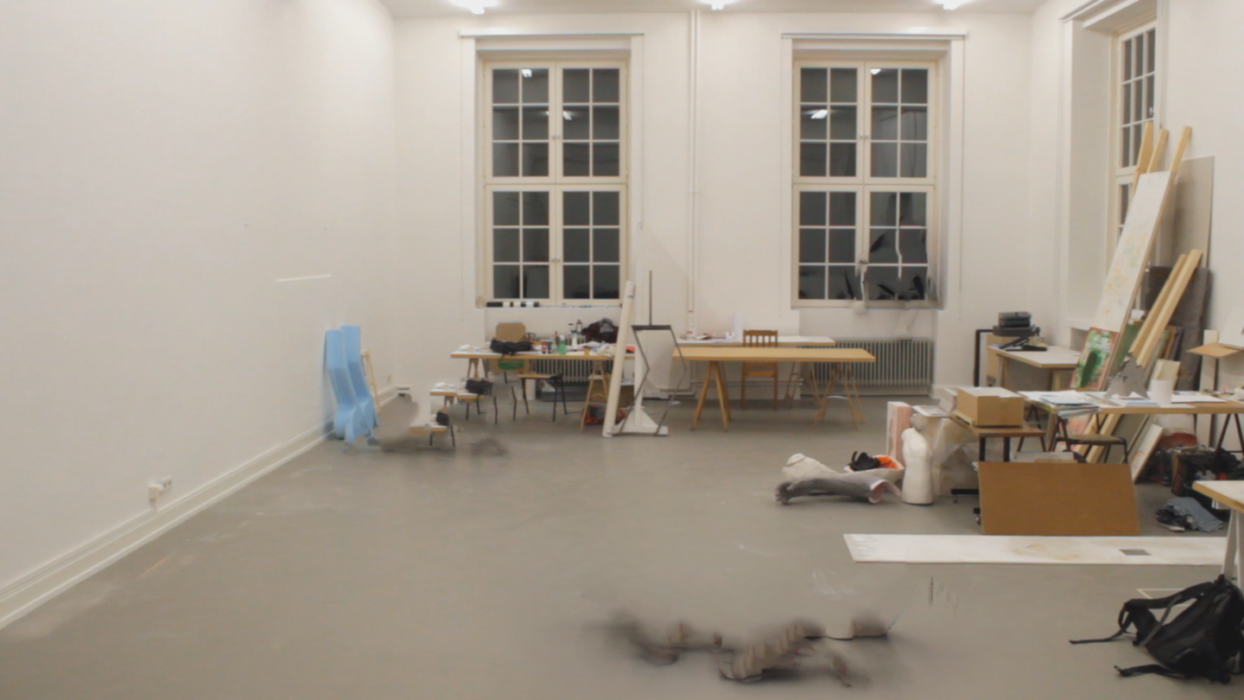 In this summer exhibition, the Kunstverein Schwerin presents the latest works by young artists of the HfbK Hamburg, studying in the classes of Thomas Demand, Jeanne Faust and Jutta Koether. Seven individual works are presented, combining the classical areas of painting, sculpture, installation and performance with new media and digital methods.

Digital cultural techniques represent self-evident means of information acquisition and communication, especially for the so-called “digital natives born after 1980”. For the artists of this generation, the parallelism of digital and everyday life is natural and intuitive. Communication platforms of the Internet not only penetrate the individual world of personal perception and thought, but also flow into artistic concepts and working methods.

NELE MÖLLER’s performance the sky is the limit is composed of found film excerpts of scientific lectures, which transfer from the Internet to the real space. This effect is doubled by the simultaneous, pictorially staged imitation of the images in the background projected and compiled from YouTube snippets.

FLORIAN DEEG plays with the possibilities and transitions of analogue and digital models. A supposed documentary studio view is manipulated by means of digital retouching, almost to the point of complete erasure of the artist. The work “Pfuetze” analyzes the acoustic and visual impressions of the raindrops by computer, generating artificial digital patterns.

The work of FLORIAN BRÄUNLICH is concerned with the generative development and the storage of concrete tones. Toneless records were sent by mail to various locations. Travel resulted in scratches and traces on the surfaces of the records, and are audible in the exhibition room.

In addition to these electronic media and digital methods, which are still considered to be “new” within the history of art, well established art genres such as painting are also present in the current day. While on one hand, the actual medium of painting itself can be questioned as to how it fits into and contributes to the digital age, painting machines separate the artistic process from the creative idea. On the other hand, objects and codes of technical progress become motifs and critically question themes of painting.

In her series of car interiors, FRIEDA TORANZO JAEGER projects the future perspective of the autonomy of man, within the development of the process to fully automated systems, to the realistic vision of self-running automobiles. In this space of continuous technology, the interpersonal interaction is also reduced to the surface of the touch screen.

ELISA BARRERA transfers elements of the popular and consumer world into the exhibition space. Furniture, which is supposed to make our living areas more comfortable, become objects with a repelling metal surface. A clothing rack with metal thorns connects with the themes of vulnerability in her drawings: the fragility of seemingly secure human connections, emotions, and abstract constructs.

LEONIE KELLEIN examines the complexity of interpersonal interaction with her figures. Initially, they are mentally conceived in concrete spaces. “The Woman at the Window” creates a cinematic narrative with the tension between anonymity, voyeuristic gaze and blatant self-portrayal.

The paradoxical relationship between the urban man and the natural world is the subject of the objects and installations of ANNE LINKE. Starting from observations of the human interference with the behavior of birds in the city, she developed “How to” objects, which juxtapose the action of feeding and shooing.

The exhibition LERCHENFELD I demonstrates that classical genres, analogous and digital, are not opposed to contemporary art – they actually play a surprising role in the cross-medial penetration and the trans-medial shift.

with the performance the sky is the limit by Nele Möller